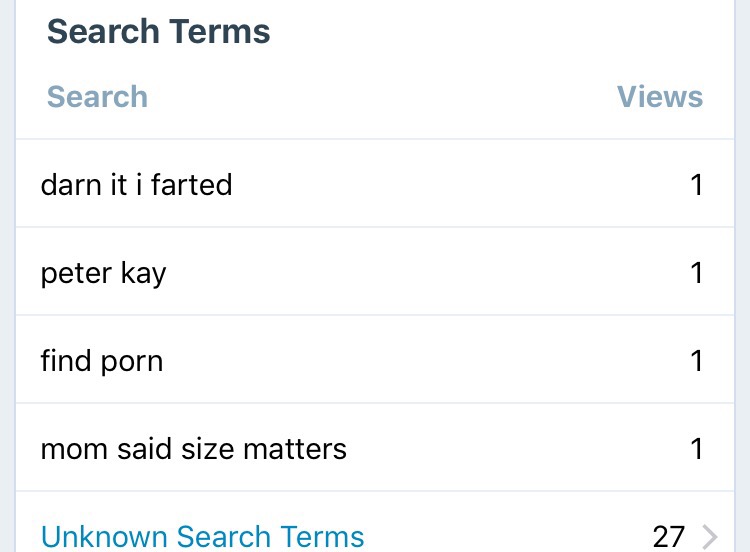 After reading this post below at That’s What Anxious Mom Said, I felt compelled to add my own list below.

Some odd people visit my blog, and I don’t just mean those of you who pop in on a regular basis. More often that not, the terms search terms WordPress shows me that people used to get to this blog are fairly unusual. Sometimes they’re downright creepy. (Thank god I can’t see them all, or […]

via I Said What? — That’s What Anxious Mom Said

Here are the most recent hilarious search terms which brought visitors – maybe even you – to my blog;

And so much more…

It would appear that in the past month, my posts about calling your child a dumbass, my interview with Todd Talbot and my writing on the Canadian Live-In Caregiver Program have been the most active.

I’ll have to re-visit this again next month, but excuse me while I cross the border into Belgium…

It’s been a while since I’ve had the pleasure to compile such a list, but here are the 13 Things you WILL be talking about today (and tomorrow, etc)

5. GM is cutting 800 Canadian jobs and moving them to Mexico… Damn.  I hope Trump doesn’t hear that.  In retaliation, Canada has agreed to build a wall between Canada and Mexico.  Damn you capitalism!!!

6. I don’t know where you live, but here in Toronto where we need road tolls to keep the 905’ers out (see wall building), we have pot holes the size of, well, Mexico.  One such pot hole cost my wife her front tire and rim.  Damn you Mexico!

9. I read somewhere that Canadian Prime Minister Justin Trudeau’s mother had met the Donald (see President Trump earlier) back in the 70’s.  I thought the writer was trying to convince us that Donald Trump was his father, and when I told this to someone, they said, “Trump?  No.  Castro, yes!  They even look alike!!”  What?!?

Ah, a snowy Thursday in Toronto, our second such day this year, and with winter not officially here until December 21st, I always worry that even in areas where there is a lot of snow people forget to apply common sense in many different areas of their lives when snow stays on the ground.

So today is the perfect day for me, to educate you, on the 13 Things You Need To Do Now That The Snow Has Arrived.

Let’s start with #1 because it’s the most important and the City of Toronto By-Laws and Chapter 719 of the Municipal Code lay it all out there for you.

2.  Failure to remove snow and / or ice can result in a fine of up to $5000 under the Provincial Offences Act.

3.  Anyone – strangers, neighbours, government workers, can call 311 to notify them if your snow and / or ice is not removed within 12 hours after a snowfall.

4.  Thinking about clearing your snow onto the street?  DON’T!  Besides the obvious fact that it make driving that much more dangerous, it’s against the by-laws and you can be fined for doing this.  Plus, it’s fairly obvious when your lawn (which loves the water in the spring) is flat the snow in the street in front of your house is densely packed compared to others.

5.  If the City of Toronto has to send someone out to shovel or salt your sidewalk, you will be charged a fee for this “service: and if you do not pay it, it will be added to your property taxes.

6.  Starting this year – 2014 – the City of Toronto is paying special attention to those mounds of snow you pile at the curb in front of your house because as the weather changes they pose a safety concern regarding visibility, and drivers trying to avoid them.  Plus, by the mere fact that they are on the street means you are in violation of Section 719-5 of the Municipal Code.  By-law officers might force you to remove it at your own expense or fine you.

7.  Clean off your car before you  drive it!  All windows, the front and tail lights are essential to ensure you have complete visibility.  The majority of vehicle – pedestrian accidents in the winter occur when drivers cannot fully see out of their windows and bump into people crossing the street.

8.  I know it’s a pain in the butt for many of you, but you really do need to come to a full and complete stop at all traffic crossings when there is snow.  Besides being the law, and potentially dangerous if you do not, by rolling through stops, or around corners you also run the risk of having to brake suddenly and sliding or spinning out of control, or worse, stopping only to have the car behind you slam into you, and then for you to hit someone as a result.

9.  Signal.  I prefer to refer to the turn signal as an “indicator” because while it may be law to signal before you turn, it’s nice and kind to indicate to other drivers what you intend to do with your vehicle.  This is especially important if you are one of “those” drivers who do not feel the need to stop at every intersection as indicating your intentions keeps pedestrians safe and the cars around you less likely to want to roll down their windows and throw a snowball at your car.

10.  Be extra courteous to those around you who are walking when you are driving.  They are dealing with un-cleared sidewalks, and cold, or wind, plus heavy clothing and usually something in their hands.  The LAST thing they need to do is wonder whether that car is a) going to stop, b) sees them c) start to proceed before they finish crossing the street.

13.  Put a smile on your face and be nice to others!  Say hello to neighbours, strangers and passers by.

Back on July 6th, 2006 I had some really great stuff to share with my 6 followers, namely Thirteen Healthy Things you Can Do For Yourself Today.

I obviously did not follow any of this information.  😦

There are tons of things that my children won’t understand because if it was a technology it became obsolete, or a TV show that got cancelled, or a commercial that ran it’s course. But this list came to me in about 10 minutes, so it’s a peek into my brain to see what the heck I am thinking about at various times during the day.

And please, based on #13, do NOT judge me. LOL. Here are 13 obscure things my kids will never understand.

We can teach them that.

The real number 1. A Stanley Cup in Toronto!

Watching whatever was on TV on the 30 stations provided.  Especially for sports, there was no choice and no selection.

I could go on.

Find me on Google!

The Urban Daddy is Ranked on Top Blogs.ca. Please click through!!

Member of Circle of Moms

Two Canadians Sentenced to Prison for Bitcoin Fraud in the US

Oregon’s Attorney General has reported that 2 Canadians – Karanjit Singh Khatkar, 23, and Jagroop Singh Khatkar, 24, residents of Surrey, British Columbia – were sentenced to 24 months in federal prison and three years’ supervised release for conspiring to commit wire fraud and money laundering in a scheme to steal bitcoin from a resident […]

Be Careful Who You Use for Tax Preparation: Ontario tax preparer sentenced to 4-years in jail

George Nkoke Nnane of Richmond Hill, Ontario, was sentenced in the Superior Court of Justice in Toronto to 4-years in jail for filing fraudulent tax returns, the CRA has reported. A CRA investigation found that Nnane, the chief executive officer of Golden Capital Management Inc., a tax preparation business, prepared individual tax returns for the […]

Bouclair Inc, its CEO and former VP charged by the CRA for Tax Evasion

The Canada Revenue Agency (CRA) is reporting that home-decor chain Bouclair Inc. its CEO, and former VP are scheduled to go to trial on tax-evasion charges in January 2021. The CEO, Peter Goldberg, a Westmount, Quebec resident faces eight charges alleging he violated the Income Tax Act between 2009 and 2011. Bouclair Inc. is charged […]

Introducing Personal Banker – Finding Tax Credits for you, and more

The Canada Revenue Agency (CRA) has reported that a Vaughan, Ontario based, general contractor has been fined for evading GST/HST. The press release by the CRA announces that Gilles Larocque of Nobleton, Ontario pleaded guilty to tax evasion. He was sentenced in the Ontario Court of Justice in Newmarket and fined a total of $301,125. Larocque pleaded guilty on January 7, 2020, in the Ontario Court […]